An ongoing and incomplete 20th century history of female “nimble fingers” in computing. 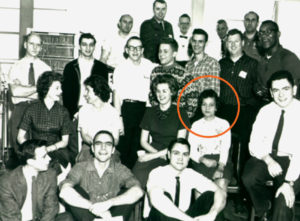 Hilda G. Carpenter weaves the first prototype of magnetic core memory. She is never credited by name in any reports. Reports indicate one plane of core memory can be completed in about 40 hours (Monteiro 2017). 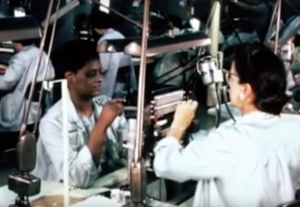 Screenshot from “Weaving Software into Core Memory by Hand” 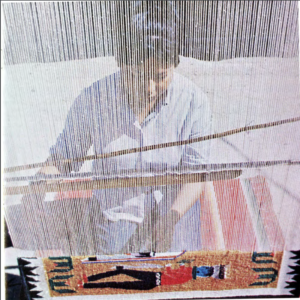 Fairchild Semiconductor opens an assembly plant on the Navajo reservation in Shiprock, NM (N 923) in an act of “insourcing.” “Reservations provided spaces of exception to US laws on minimum wage; in this way they were like foreign countries, but in other ways American mythologies around Indianness gave these workers a desirable identity as culturally foreign yet familiar“ (Nakamura 2014b). Nearly all of the workers at the plant are female. 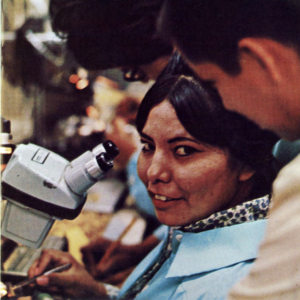 Fairchild produces a marketing brochure highlighting Shiprock’s success. It is attributed to the innate weaving and crafting capabilities of Navajo women that can be translated to circuit building. It is both their race and gender that make them the ideal laborer since the “untapped wealth of natural characteristics of the Navajo . . . the inherent flexibility and dexterity of the Indians” : “For example, after years of rug weaving, Indians were able to visualize complicated patterns and could, therefore, memorize complex integrated circuit designs and make subjective decisions in sorting and quality control” (Nakamura 2014a).

“[Prior] to its closing, Fairchild employed 922 Navajos, most of whom were women. Fairchild was one of the largest employers of Navajo labor on the reservation, second only to public sector employees, including the Bureau of Indian Affairs and the Navajo nation.” (Nakamura 2014b)

Protesters with the American Indian Movement occupy the plant, eventually resulting in its permanent shut down (Nakamura 2014b).

In reflecting on Shiprock, Fairchild Semiconductor executive Charlie Sporck reports “It never worked out, though. We were really screwing up the whole societal structure at the Indian tribe. You know, the women were making money and the guys were drinking it up and it was a failure” (Nakamura 2014b). 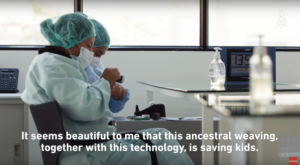