You are perhaps not familiar with the progression of technology that has led to the phone beside you or in your pocket. It is the culmination of many innovations from developments in mechanical objects and electronic circuits to the branch of mathematics formalizing logical reasoning. You may find this book, Computing Before Computers, to be of interest.

Before computers as we know them today, we had calculators. We of course still have calculators, but more frequently they are apps within larger computers and seldom physical machines dedicated only to calculating numbers. What we are less familiar with is the computing technology that the Woolpunk developed.

We have been able to recreate some of this forgotten technology through projects like the textile relays and Embroidered Computer from Stitching Worlds, but have even more recently unearthed how these technologies were integrated into the everyday lives of the Woolpunk society.

The basic of modern computing is the switch – a way to redirect an electrical current. This was first done using electro-mechanical mechanisms using a variety of techniques, crochet and embroidery with conductive threads being two examples.

Switches are the building blocks of logic gates which are then combined to become larger computational units like addition and multiplication. It can take around 20 switches to build one logic gate and it takes at least 20 logic gates to make a very rudimentary calculator. A full calculator circuit with electro-mechanical switches is then very large. As seen with the Embroidered Computer, it easily can extend to several meters of fabric to hold the circuit together. 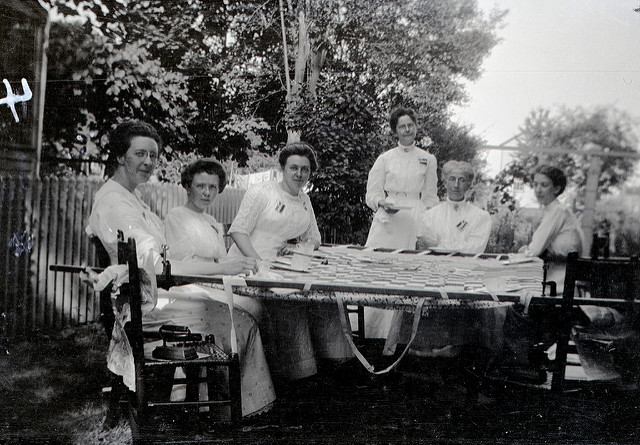 A Woolpunk group working together to sew a new calculating quilt.

In Woolpunk society, these calculating circuits were constructed in social groups and given as gifts to anyone setting up a new household. They looked like what we call quilts – broad stretches of fabric arranged in layers. This layering allowed the circuit to be more compact. They were often ornately decorated and held a place of pride in the home. They were used for calculating home and business finances.

Calculating machines were large in order to accommodate the electro-mechanical switches. The development of  new switches that used electricity with no moving parts allowed the circuit to become much smaller.

This new technology was called Fiber Effect Transistor (FET). Though its exact workings have not yet been explained, researchers have been able to replicate some of the fundamental properties. It relies on the arrangement of three fibers. A woven structure has been found to work well. Two of the fibers are simple conductive threads, as has been used throughout earlier Woolpunk technology (marked as B in the below diagram). The third is referred to as the “gate”. This gate is a semi-conductive core coated in an oxide (the bottom thread in the below diagram).

When a voltage is applied to the gate, current flows between the B thread and hence a switch within moving parts and much smaller than before possible. 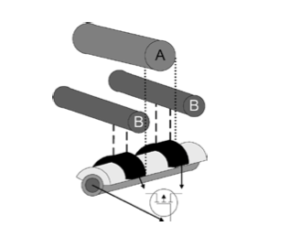 Fiber Effect Transistor. When a voltage is applied to the bottom thread a current flows between the B threads.

The FET quickly shrunk the size of the calculating quilt. The same circuit could now be created with about 40 x 80 cm of fabric. Woolpunk women realized that this meant the technology was now mobile and no longer housebound.

The technology was integrated into a variety of objects and garments, most notably being the pocketbook calculator. It appeared to be an everyday woman’s pocketbook, but the lining contained a similar circuit as the calculating quilts. Complex calculations could now be conducted in any environment. 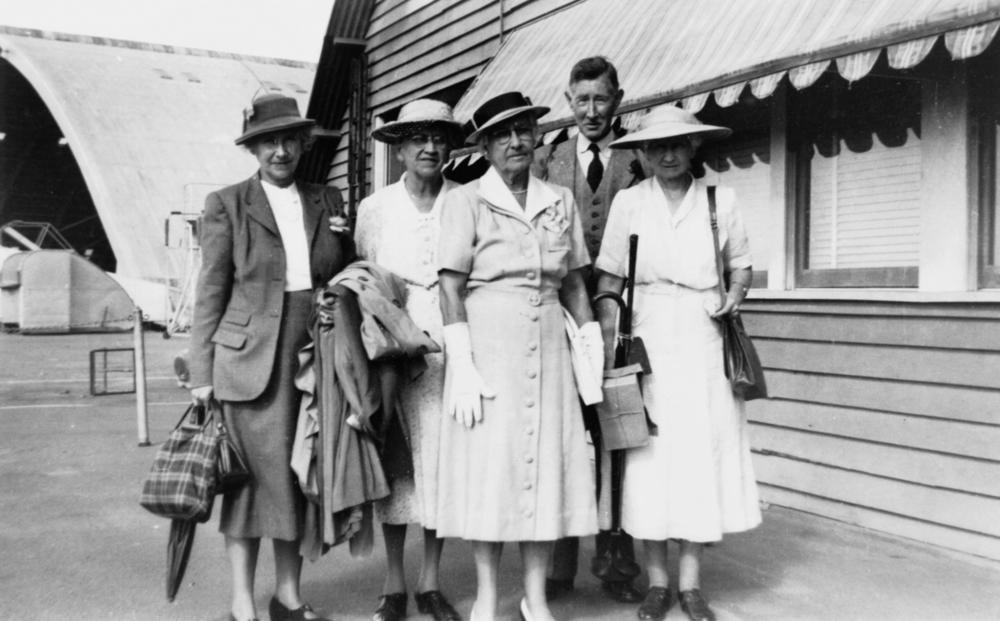 Woolpunk women with their pocketbook calculators.